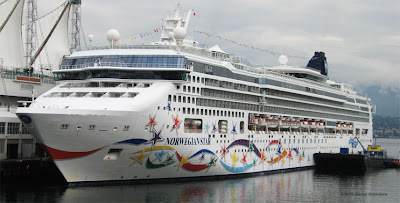 Norwegian Star docked at Canada Place
on October 2nd, 2010.
Photo © 2010 Aaron Saunders
When she was launched in 2001, Norwegian Star was the first ship truly designed and built for Norwegian Cruise Line‘s “Freestyle Cruising” concept.  Freestyle Cruising centered around the idea that, rather than having set dining times at a set table throughout the voyage, passengers should be able to dine when and where they want, and with whomever they choose.  Because this would prove problematic in a traditional ship with a single dining room, Norwegian Star was built with no less than thirteen dining options, with nine bars to compliment.
The theme of “choice” extends to passenger accommodations, with a whopping twenty-three distinct staterooms to choose from. Below are some of the most diverse and unique accommodations you’ll find aboard the Norwegian Star. 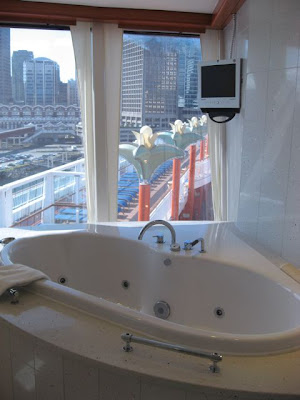 The Jacuzzi of Garden Villa # 14500.
Photo © 2010 Aaron Saunders
The big news-maker when Norwegian Star was launched were her two, three-bedroom Garden Villa suites.  Located high above everything on Deck 14, these spacious suites feature a living room overlooking the main pool deck, complete with Grand Piano, sitting area, flat-screen TV, and dining area.  Both are accessible only via a private elevator lobby and staircase. 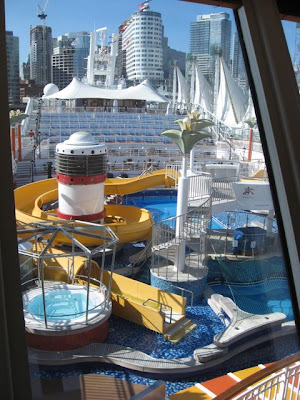 A commanding view of the pool deck.
Photo © 2010 Aaron Saunders
Adjacent to this is the master bedroom, as well as two additional well-appointed, full-size bedrooms resulting in a gargantuan stateroom that can sleep a total of eight guests.  The real ‘oooh’ factor, though, is in the master bedroom and bathroom. 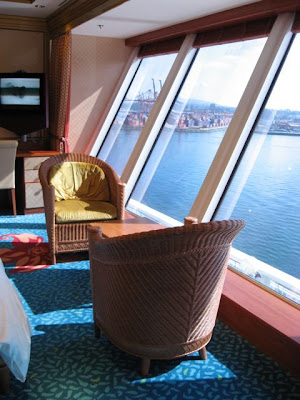 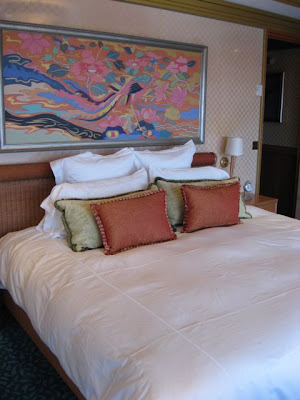 Master bedroom, with bed positioned
towards the floor-to-ceiling windows.
Photo © 2010 Aaron Saunders
The master bedroom features all the expected amenities, but the real attraction here is the floor-to-ceiling windows that provide an unobstructed view of the ocean.  It’s not difficult to imagine a room like this paying for itself during scenic cruising of Alaska’s Glacier Bay.  Indeed, scenic cruising seems to have been on the minds of the designers – something made all the more evident by the truly spectacular bathroom. 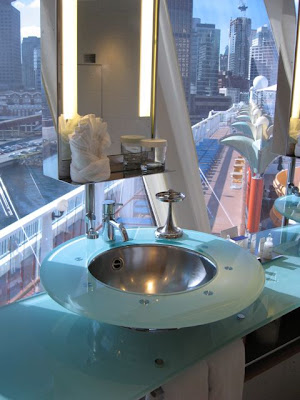 Washing your hands doesn’t mean being away
from the gorgeous views.
Photo © 2010 Aaron Saunders
The generous bathroom itself is done with floor-to-ceiling windows, ensuring remarkable views at all times.  These windows are tinted from the outside, so occupants need not worry about stepping out of the shower with all that glass around them.  In fact, the shower itself is glass. 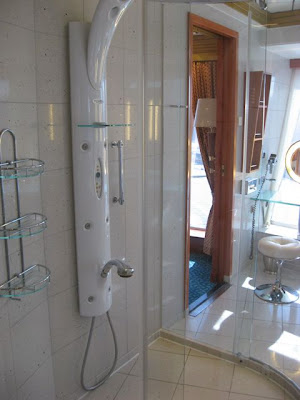 The shower.  Note the wraparound glass ‘walls.’
Photo © 2010 Aaron Saunders
Besides the views, the amount of natural light these Garden Villas let in is remarkable.  With the exception of the walk-in closets, not an inch of these rooms lacks a full floor-to-ceiling view of your surroundings. 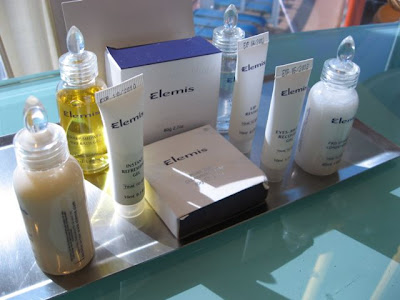 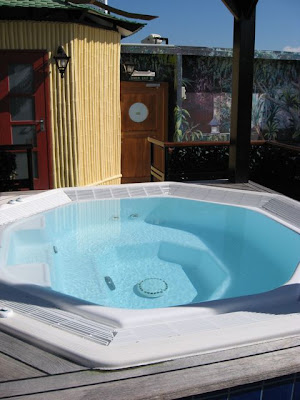 Your own private hot tub.
Photo © 2010 Aaron Saunders
Make no mistake about it: these rooms are big.  For a party of eight, they might be just the ticket: they have the space and the ‘wow’ factor to make for a truly memorable vacation.  However, two people might find it a little, well, lonely.
Deluxe Owner’s Suites – Category SA – Deck 12 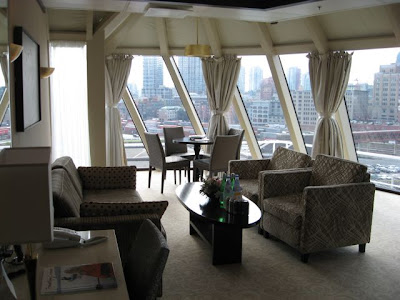 The living room of Deluxe Owner’s Suite 12502.
Photo © 2010 Aaron Saunders
This is a brand-new category for the Norwegian Star, added during her drydock earlier this year.  In fact, all staterooms located on Deck 12 are new, and take the place formerly occupied by the Spinnaker Lounge, which was relocated down to Deck 7 during the refit.  These rooms have a different color scheme from the rest of the ship, but as Iris, Group Services Coordinator onboard the Norwegian Star pointed out, “It’s Freestyle; there’s something for everyone.”
The four Category SA Owner’s Suites are located at the bow of the ship and feature, in my opinion, views that rival the Garden Villas two decks above.  Essentially, you’re seeing the same views as the Officers on the bridge one deck below. 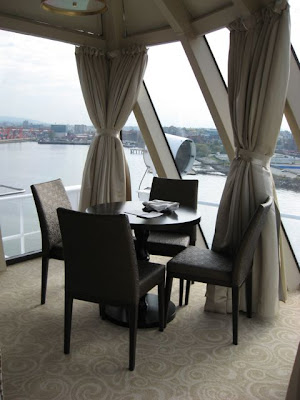 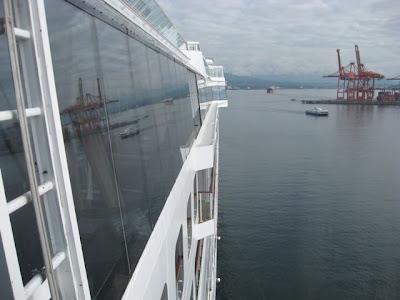 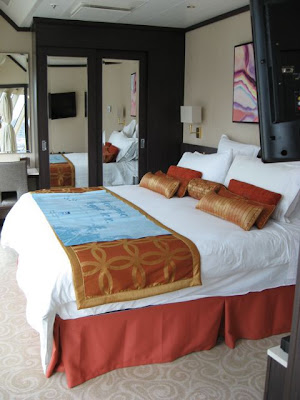 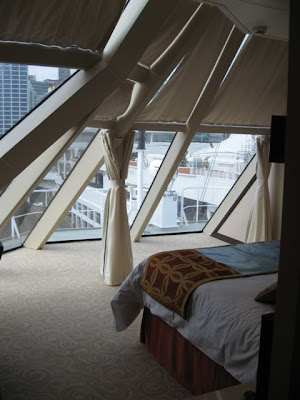 Bedroom views facing forward, stateroom 12500.
Photo © 2010 Aaron Saunders
While none of these Deluxe Owner’s Suites feature balconies, their remarkable views more than make up for it.  While the outer suites sleep four comfortably, the two inner suites – 12500 and 12000 – can sleep up to six thanks to the inclusion of a small adjacent bedroom that’s ideally suited for kids.
Inside Stateroom – Categories I1, IA, IB, IC, ID, IE, IF, IX – Multiple Decks
While we’re here on Deck 12, let’s pop across the hall and have a look at one of the new Inside Staterooms.  Essentially the same in amenities and function as the existing staterooms on other decks, these boast the same modern color schemes as their suite counterparts.  Gone are the dazzling array of velvety colors found amongst the existing staterooms, replaced instead with dark woods and charcoal greys that give the room a smart, sophisticated feel.  In fact, a few times I felt like I was aboard Holland America’s Rotterdam, which recently had her staterooms re-done in a similar scheme. 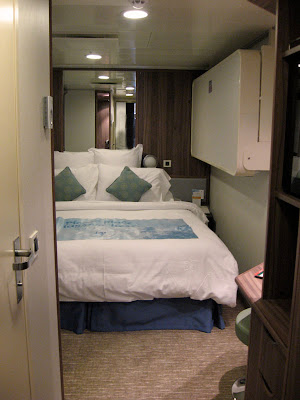 Existing Inside Staterooms (all other categories).
Photo © 2010 Aaron Saunders 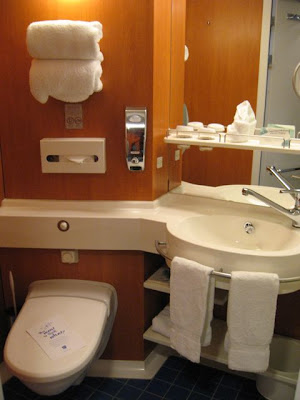 Small, but pleasing nonetheless:
the standard inside stateroom bathroom.
Photo © 2010 Aaron Saunders
Call me crazy, but I still like inside staterooms.  They offer a tremendous value and are perfect for those who don’t plan on spending a lot of time in their rooms, preferring instead to be out and about. The bedroom area of Family Suite 12008.
Photo © 2010 Aaron Saunders
Another new category of stateroom added during the drydock, the spacious family suites allow for up to six passengers per stateroom, thanks to an innovative layout and partitioning scheme.  While the suite itself is essentially one large room, a hidden partition on a track system can be pulled out from the wall, effectively creating two rooms in one and allowing for privacy between the main room and the secondary sleeping area. 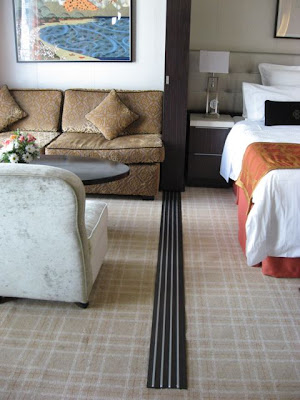 The track partition that separates
the main bedroom from the spare sleeping area.
Photo © 2010 Aaron Saunders
The partition only goes halfway across the room, and eliminates the need to open or close the partition to allow parties sleeping on the pull-out beds to use the washroom at night.  These Family Suites are remarkably well laid-out, and have generous floor space.  While full six-person occupancy might feel a little tight, four people can certainly fit in these staterooms without any problem at all.
Owner’s Suite with Two Balconies – Category SB – Decks 9 and 10 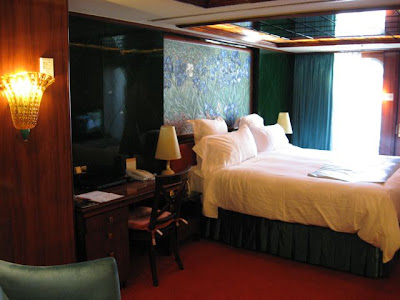 The sleeping area of Owner’s Suite 10006.
Photo © 2010 Aaron Saunders
Moving down two decks, we find the Owner’s Suites with Two Balconies all the way forward.  Done in a completely different style from the newer staterooms on Deck 12, these rooms have a cozy, intimate feel with their wood-like paneling, velvety colors, and unique design.  In fact, it’s not difficult to imagine a room similar to this existing on the great transatlantic liners of yesterday. 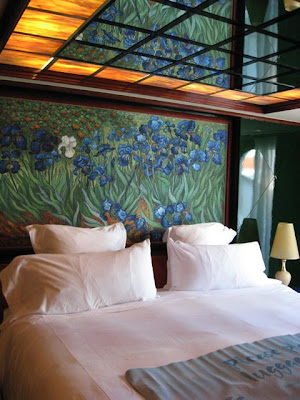 Closeup of the bed.  Note the mirror above
reflecting the painting behind the pillows.
Photo © 2010 Aaron Saunders
Once again, the entire room is decidedly well laid-out.  The balcony nearest the bedroom looks out over the ship’s bow, while the one adjacent to the dining area runs the length of the starboard or port side, depending on cabin location. 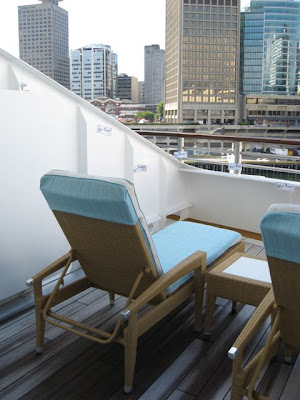 One of two balconies in 10006, facing forward.
Photo © 2010 Aaron Saunders
Whomever designed the bathrooms on the Norwegian Star‘s suites seems to have been working overtime – they’re extremely well designed, and these particular Owner’s Suites are no exception. 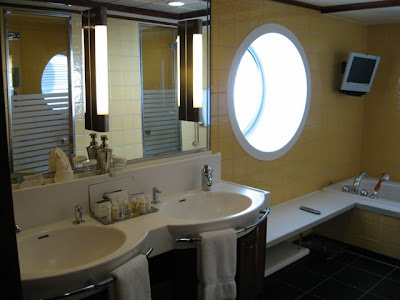 The bright, spacious, yet nautically-themed bathroom.
Photo © 2010 Aaron Saunders
The bathroom includes dual sinks, a full soaker tub, separate makeup area, toilet, and an individual shower.  A large porthole window illuminates the entire area and makes the bathroom feel as inviting as the rest of the stateroom. 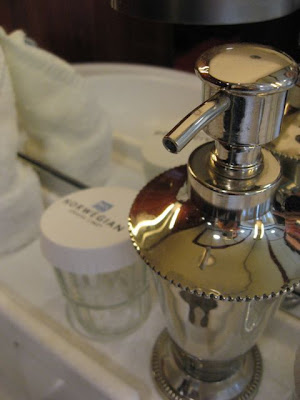 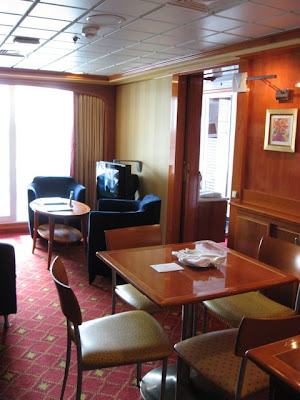 The living and dining area of suite 11050.
Photo © 2010 Aaron Saunders
Last but not least, we have perhaps my favorite suite aboard Norwegian Star.  The two-bedroom family suites boast fantastic wood panelling throughout, and their wooden archways above doors and windows give the room an almost Parisian feel.  These staterooms are spacious without being ostentatious, and have a cozy, intimate feel.  All the expected amenities, including bar set-up, a podded coffee maker, and a small sitting and dining area are included. 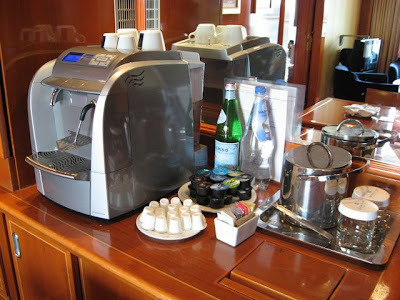 Why leave your stateroom when coffee is included?
Photo © 2010 Aaron Saunders
The bedroom lies off the main living area, which also doubles as an additional sleeping area for a total occupancy of five people.  The master bedroom is beautifully done, and opens onto the well-appointed, and brightly lit, bathroom.  The design of the bedroom itself has a distinctly Victorian feel to it – perfect for those who love old-world elegance, with a modern twist.  A pair of drapes separate the room from the bathroom, ensuring privacy even when the stateroom is at maximum occupancy. 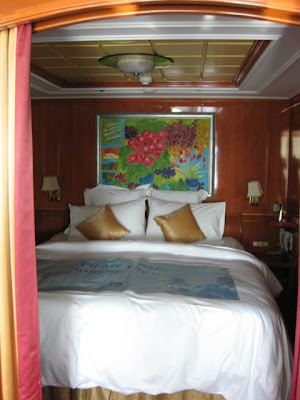 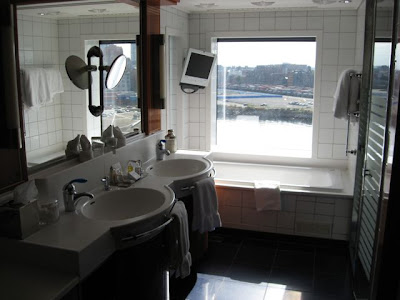 Like the other suites aboard Norwegian Star, the bathroom of the two bedroom family suite features a large picture window next to the bathtub – ensuring scenic cruising doesn’t go unnoticed.  Dual sinks, a separate shower and toilet stall, and even a television compliment this spacious room. 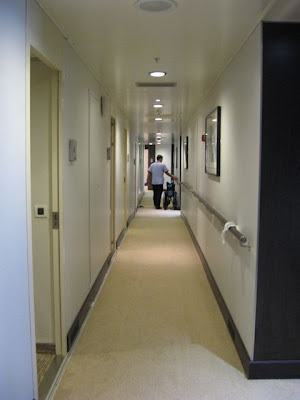 The new passenger corridor on Deck 12.
Photo © 2010 Aaron Saunders
As we finish our tour of some of the Norwegian Star‘s staterooms, it’s hard not to be impressed with the work the company has done on the new Deck 12 staterooms.  When I first heard of the planned renovations, including the relocation of the Spinnaker Lounge, I was skeptical.  I wondered how the entire process was going to be pulled off.
Instead of a rush-job, it’s clear NCL put quite a bit of thought into the new stateroom arrangements, and their design and execution clearly fills a need in their passenger base.  So far, these additions are exclusive to Norwegian Star; her sister ship, Norwegian Dawn, still sports the original arrangement, with the Spinnaker Lounge on Deck 12.  If the refurbishment of the Star is considered successful, it’s not difficult to imagine the Dawn receiving similar treatment in the future.
It’s clear that NCL values this trendsetting ship, and this latest round of renovations make Norwegian Star a ship well suited to a variety of cruisers seeking a truly ‘freestyle’ experience.
Be sure to join From the Deck Chair tomorrow as we look at some of the Norwegian Star’s public areas.  For more information on the Norwegian Star, be sure to visit the Norwegian Cruise Line website.