How Carnival Got Their Funnel 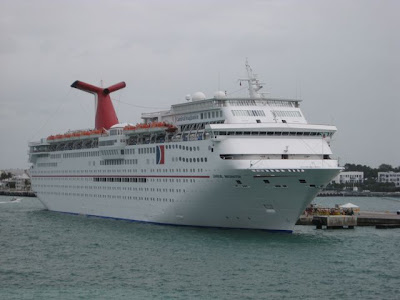 Regardless of whether it’s your first cruise or your hundred-and-first, there’s no mistaking a Carnival cruise ship: the tall blue, red and white funnel that resembles a whale’s tail is recognized around the world and remains to this day arguably one of the company’s greatest achievements.

When Carnival bough the Empress of Canada from Canadian Pacific in January 1972, one of their first tasks was to repaint Canadian Pacific’s livery from the funnel.  The livery CP had recently designed for their ships consisted of a green funnel with a white semi-circle and a yellow triangle; this was meant to look like an abstract ‘C’.

Seizing on that, Carnival decided to use the white semi-circle already applied to the funnel as a base.  The majority of the funnel was painted red, but with the triangle changed to a blue semi-circle.  Part of the initial white base was kept from the original CP livery.

When Mardi Gras set sail on her first – and now infamous – voyage (she ran aground shortly after leaving port) in 1972, she did not yet have her famous fins adorning her funnel.  Indeed, it wouldn’t be until the 1982 launch of Carniva’s first newbuild – Tropicale – that the distinctive ‘whale tail’ would appear on a Carnival ship.

Now longtime Carnival designer Joe Farcus apparently drew inspiration for the funnel from a somewhat unlikely source: the SS France, which was then sailing as the Norway for Norwegian Cruise Line.  The France featured two funnels with wing-like protrusions on either side designed to carry engine exhaust out and away from the ship, rather than up through the top of the smokestack like many commercial liners.  Farcus recognized these benefits and designed Carnival’s funnel with a more mammal-like appearance as opposed to the jet-set styling of the France/Norway.

Interestingly, during a later refit that saw two additional decks added to the Norway, funnel uptake pipes were added to the smokestacks which rendered the unique wing exhaust system redundant.  Not until a boiler room explosion at the Port of Miami in May 2003 would smoke pour from the winged stacks again – sealing the much beloved ship’s fate. 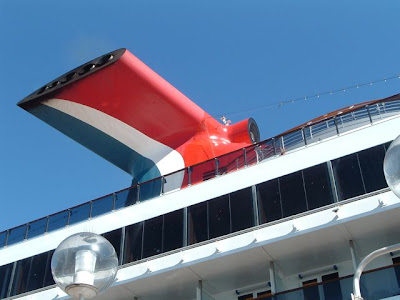 An upward shot of Carnival Spirit’s funnel.
Note the exhaust outtakes on the side of the wings.
Photo © Aaron Saunders

So the next time you cruise on a Carnival ship – or even see one in port – you can look at tone of he most recognizable icons of modern cruising knowing its roots are seated with two classic shipping companies: Canadian Pacific, and Compagnie Générale Transatlantique.